June 3rd to June 5th: In Search of Pelmeni in St Petersburg, Russia.

According to our guide Katja, St. Petersburg only has 60 days of sunshine per year. Well, we indeed got lucky because all three of our days in Russia were hot, sunny and beautiful! (Which certainly makes up for that horrible weather we had earlier in Belgium and Holland). Who would have thought that our warmest weather of the trip would be in Russia?

In Russia, there’s a special exception for cruise ship passengers in that we don’t need to get a visa if we stay with the tour group at all time. However, this meant we couldn’t even get off the ship to have lunch on our own. Ultimately, the four of us decided to shell out the cash to get visas ahead of time so we were free to roam the city and shop to our hearts content.

Now, St. Petersburg may not have the Kremlin or the Red Square, but it has some equally impressive buildings and museums, most notably the Hermitage and the Church of the Savior on Spilled Blood. We spent the majority of our first day around the Spilled Blood Church. This church was built by Alexander III to commemorate the death of his father, Alexander II, who was assassinated on the site (hence the gruesome name). Check out the photos below to see the amazing building. Inside, there are over 7000 square meters of mosaics that were simply breathtaking. Lincoln and I both agreed that it was the coolest building we had ever seen. (The Taj Mahal was a close second on Linc’s list and Angkor Wat was second on mine).

After visiting the church, we went across the street to a souvenir market that we nicknamed Babushka Market because it sold literally thousands of stacking dolls. (yes, I know, matryoshka is the correct word for the stacking dolls, but babushka is so much easier to pronounce!) Of course I bought a stacking doll along with a music box Kremlin and a beautiful watercolor to add to my growing collection of round-the-world art. (which is currently gathering dust in Mom and Dad’s basement).

That night we headed off to the ballet at the Aleksandrinsky Theater, founded in 1756. How appropriate that we got to see Swan Lake, written by the Russian Pyotr Tchaikovsky and first performed in 1877 in Moscow. Tchaikovsky also wrote the ballets for Sleeping Beauty and The Nutcracker. The dancing was beautiful and the music was just like I remembered from when I was a kid!

Our second day was mostly spent in the Hermitage, a museum with a fantastic collection of art and treasures. They even had their own Egyptian mummy! I was a bit bummed out to find out that none of the 57 remaining Faberge eggs were housed in this museum. The ten that Russia has on display are all in Moscow, so I guess I’ll just have to go there someday! However, apparently I can find some of the eggs in museums in Cleveland, Baltimore, Nashville, DC, or Richmond. Hmmm . . . I contented myself with buying a mini Faberge egg for my charm bracelet. ☺

One of my goals in Russia was to find some authentic Russian dumplings to eat, called pelmeni. At Madison in Wisconsin, we had a shop that sold pelmeni and they were a delicious dinner or late-night snack. I guess I assumed they would just be sold on every street corner in Russia. Alas, it was day three and I still hadn’t found any pelmeni. The search was on! We asked around and were directed to a small Russian restaurant in a basement of a building. It was cute and cozy and they had pelmeni on the menu! Success.

The rest of our time in Russia was just spent walking around St. Petersburg, checking out the main sights and enjoying the beautiful sunshine. We couldn’t believe how clean the city was, and how many BMW’s and Bently’s we saw on the streets. In our minds, Russia was poor, decrepit, and polluted. I’m so glad we got to come and see for ourselves that St. Petersburg is certainly a metropolitan city just like the rest of Western Europe.

Okay, time to learn something (get out your history books, kids!):
– Peter the Great started St. Petersburg in 1703. He built the city virtually from scratch.
– Catherine the Great was of Germanic descent, and married Peter III (Peter the Greats’ grandson). After only six months on the throne, Peter III was assassinated. The assassin was none other than the younger brother of Gregoriy Orlov, one of Catherine’s favorite nobles. Catherine went on to become the longest ruling female in Russian history.
– In 1918, the Bolsheviks revolted against the Romanov Empire. Led in part by Lenin, the revolutionists executed Tsar Nicholas II and his family. This was the end of Imperialism and the start of communism for Russia.
– From 1924 to 1991, St. Petersburg was named Leningrad
– 1941 was one of the coldest winters in Russian history, and it turned out to be very fortunate for Russia as Hitler’s invading army was not properly equipped to deal with the extreme cold.
– Alexander Pushkin was a famous author in Russia. Unfortunately he married a party girl who liked attention, and ended up fighting a dual with a French ambassador who was attempting to seduce his wife. He was fatally wounded during this dual, and his early death at 37 is considered a catastrophe for Russian literature.

And a few lighter facts and observations:
– The word ‘Tsar,’ which means a ruler in Russia, comes from the Latin word ‘Caesar.’
– Russians do not use water taxis (even though St. Petersburg is built like Venice). The job is not profitable enough as the canals are frozen for over half the year.
– Contrary to my expectations, we only saw two bums the whole time we were in St. Petersburg. Also, hardly anyone smoked! When I picture Russia, I think vodka and cigarettes. Not so in St. Petersburg. There were probably ten times more smokers in Amsterdam than in St. Petersburg. But don’t worry, there was still plenty of vodka!
– Russia makes up 12% of all the land on Earth, but only has 2% of the world’s population.

Well, that’s all for now. Next stop is Sweden, then on to Denmark, so check in again soon if you want to see more great photos!

The magnificent but gruesomely named Church of the Savior on Spilled Blood, built by Alexander III to commemorate the death of Alexander II who was assassinated on the site. 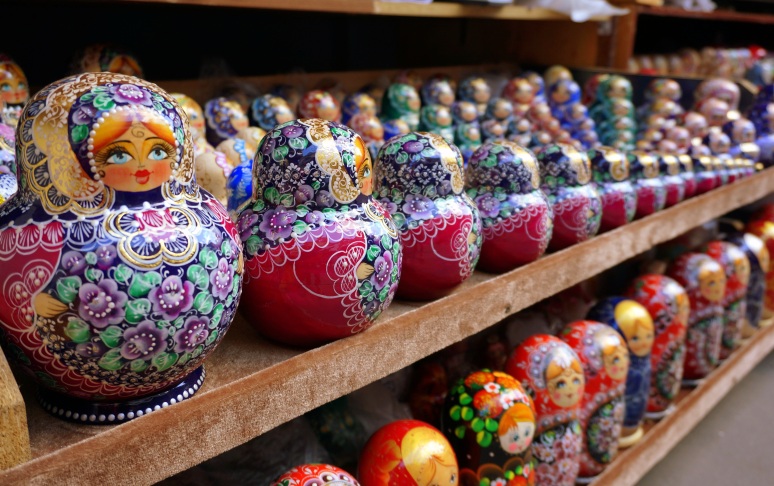 Matryoshka dolls is way too hard to say, so we called them Babushka dolls. There were literally thousands to choose from, ranging from about $3 to $2000 per set.

We finally found pelmeni! And it was delicious.

A dramatic statue on the Anichkov Bridge in St. Petersburg. This is just one of the four horse tamer statues, installed in 1851.

Our ticket to visit St. Isaac’s Church. (I just like the cool writing).

Da dna! (cheers in Russian). Mom and Dad take their free shot of vodka at the souvenir store.

A pretty view down a canal. St. Petersburg was much cleaner than we were expecting.

By about day three, we had sort of deciphered Russian language (well, we could pronounce the words but didn’t know what they meant) 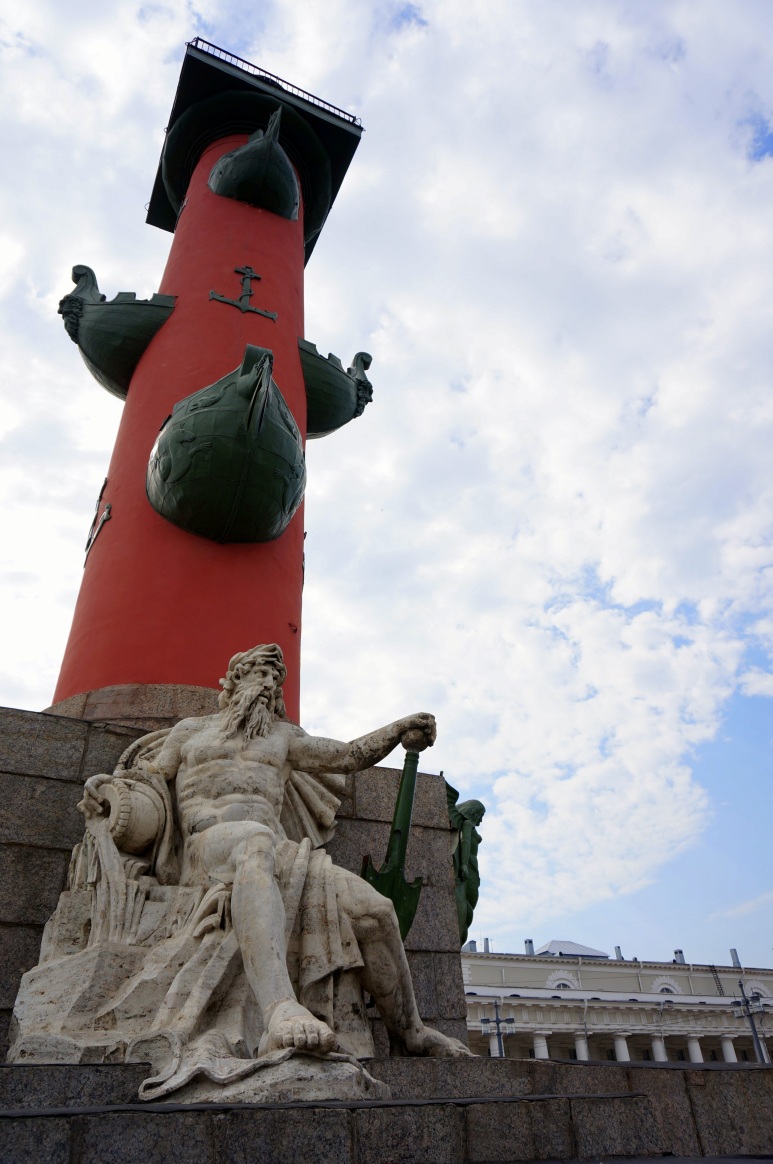 One of the two Rostral Columns – Originally used as beacons with oil lamps on top to guide ships into the port during the long dark nights. Now decorated with ship prows and mythical gods to symbolise naval supremacy.

The double-headed eagle, used as a symbol of Russian Imperialism. 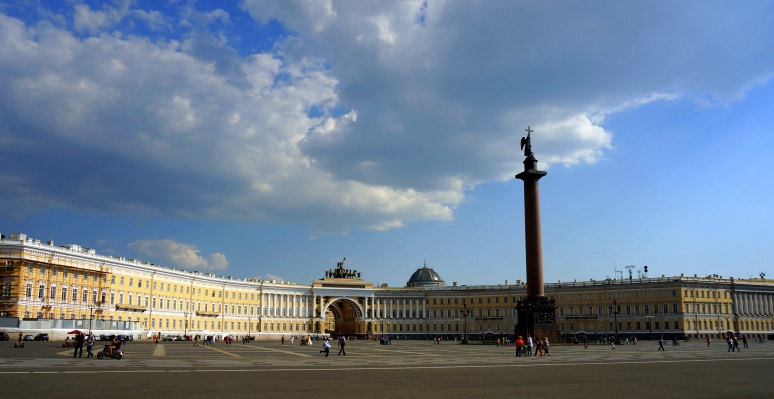 Palace Square in St. Petersburg, surrounded by the Winter Palace and the Hermitage.

Linc and I at the Aleksandrinsky Theater in St. Petersburg, Russia, built in 1756.

How appropriate that we got to see Swan Lake, written by Tchaikovsky ( a Russian) in the late 1800’s.

Linc and I cheers each other at the Russian ballet!

2 thoughts on “June 3rd to June 5th: In Search of Pelmeni in St Petersburg, Russia.”